The economy is slowing down: what does it mean for insurance companies?

The economy is slowing down: what does it mean for insurance companies?

The news has not been let out, but the world might be on the verge of a recession since economies around the world are already slowing down. The global GDP growth has been slowing down as is evidenced by the chart below: 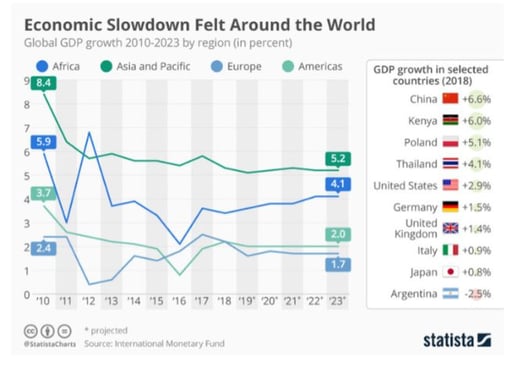 Since 2010, as countries waded out of the recession of 2008, they enjoyed economic growth. Coupled with technological innovation, the global economy really got a boost. But, mirroring Nature’s cycles, it seems it is now time to hit a plateau and slow down. In this article, we explore why the slowdown could be happening and more importantly, what it means for us in the insurance industry.

According to the World Economic Forum, the signs of a global slowdown are not only present everywhere but are also multiplying. These include the decline of manufacturing in Germany, Japan, the United States, and others. Even in China- a country which is rife with output year after year- the output has slowed. Other indicators of slowdown include the sustained inversion of the US Treasury yield curve, rising geopolitical conflicts, and the impact of tariffs.

Effects of the slowdown on the insurance industry

In a recent Goldman Sachs Asset Management insurance survey, 41% of insurers said they agree to the above reasons and expect a recession to occur by the end of 2020 or 2021. Here’s what will happen one it does:

1. There will be less demand

This is the first and most obvious effect. Since the economy is slower, fewer businesses and individuals have extra money to spend on insurance despite its importance. Even though it won’t hit rock bottom, the demand for insurance will go down and the market will become even more competitive. As mentioned in previous blogs, price doesn’t suffice to attract customers but should be paired with convenient and personal digital experience.

The money that the insured gives as premium payments, is invested by the insurance companies in real estate, other financial institutions like banks, mortgage-backed securities, and dividend-paying stocks. Now when the economy is doing well, the returns on these investments made will be good and insurance companies are less likely to challenge their claims settlement processes.

With a slow economy, however, the returns will decrease. Insurance companies will need to recover the invested money somehow. They will do this by taking a loan themselves, or by challenging their existing operations, especially the significant ones like claims. Settling claims efficiently is the solution. The first step is to categorize them into small claims that can be dealt with automatically and complex ones that require human intervention. This will avoid unnecessary delays in paying out claims and will provide much-needed control over cash flow.

In the uncertain and gloomy economic climate, scrutinizing and patrolling of financial institutions becomes even more crucial. Stricter consumer protection laws are implemented to safeguard consumers from any exploitation by these institutions.

Insurance companies might find themselves being under greater scrutiny by the government through complex rules and elaborate procedures. This will mean extra expenditure on compliance and regulations.

4. Companies will have to adopt new business models

Insurance companies might consolidate- just like banks do- to avert some of the risks. They will have to rethink their own investments and credit evaluation procedures. New investment opportunities will also have to be looked into in order to keep the returns on invested premium payments, flowing.

How to start preparing

The trademark sign of a slowdown or recession is the fall in demand. And no matter the type, each industry is affected by it. For each industry, though, the modus operandi remains the same: try to find a balance.

As per the chart, in the beginning, businesses have enjoyed economic growth for almost 10 years now. Technological innovation did change consumer preferences and brought up new communication with operational challenges for businesses. But, overall, demand has increased due to which so have profits, revenues, and competition. The positive environment has led businesses to either take risks and expand their expenses beyond what is sustainable or let complacency dominate and lead to poorly performing processes.

These extremes need to be avoided by businesses.

Business leaders have to find ways to cut down on as many unnecessary expenses as possible. This does not mean outright headcount reduction or asset divestitures, but rather cost and operational efficiency, coupled with designing and implementing new business models. But this is only the first half.

To strike a balance, the second half also needs to be implemented: generating revenue. Which is why technology, people, products, markets, and decisions that promise growth and sustainability in the future need to be continually invested in. Currently, they are committing capital but are being extra careful with the risks they take. They are also allocating to less liquid assets like middle-market loans, infrastructure debt, and private equity.

Business leaders have to practice discretion here and spend more time thinking through their risks. Cast a wide net and ask: what will the people of the future need? Which market segments will dominate? For insurance companies, this might mean investing in the millennial market, scaling up travel insurance, and using Spixii solutions for keeping up customer satisfaction (customer retention and increasing the perceived brand value will pay dividends when things go bad).

It often happens that leaders, CEOs, and management is turned upside down during slowdown periods. Many tend to perform well during one period but not the other. The best leaders, however, do well during both. That should be the standard that each leader aspires to.

The slowdown is happening. But, there are ways to prevent its effects from now. The best course of action is to begin reverse engineering and adapt as best as possible. This, too, shall pass. In the meantime, you can subscribe to our newsletter to be abreast of all the happenings in the insurance industry. 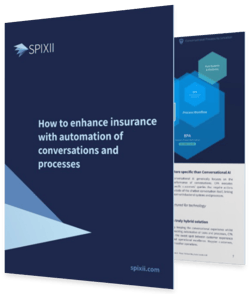 Discover how to enhance insurance with the automation of conversations and processes. Included in the White Paper:

The 3 key features any safe insurtech must have

3 min read The rapid advancements in technology have opened the floodgates to data privacy threats. Therefore, data protection has become one of the m...

3 min read Online businesses are driven towards an ever-growing rate of customer engagement since it promises them an increasing percentage of sales, ...

The sweet spot between smooth operations and customer experience

3 min read Gone are the days of interactions where customers and businesses would have to come face-to-face for a transaction. Thanks to the mighty po...