For this week’s blog, we have a behind-the-scenes story to share. The story of… how the name Spixii came to be!

January 12th marks Spixii’s 4th birthday. If one thing has remained consistent over the years (apart from Spixii’s dedication to help more people get better protected), it has been the question:

What does it mean? Where did you get it from? Why not something else?

How to pronounce it?

So, we thought it apt to share the story behind the name during Spixii’s birthday month itself!

Divulging the origin of the name ‘Spixii’

To begin with, the company is registered as Momentum Technologies but trades under the name of Spixii.

It all started by searching on the internet the acronym “ARA” which is made up of the initials of the three founders back in 2016: Alberto Pasqualotto, Renaud Million and Alberto Chierci.

The images tab of the results page displayed images of a bird- not a generic, commonly found one but a beautiful blue one that caught our attention. It was called Spixii.

Digging deeper we found that Spixii is the short name of Spix-Ara (Cyanopsitta spixii). It is also known as the little blue macaw and is a bird native to the lush lands of Brazil. 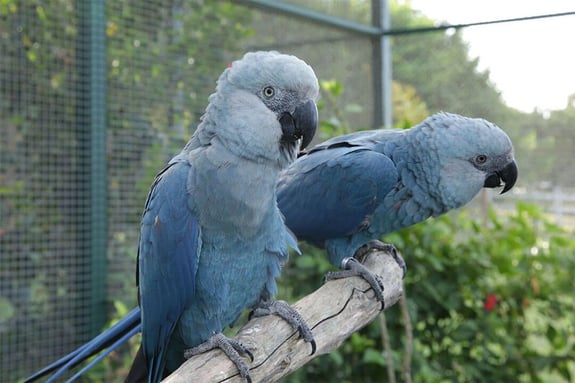 The beautiful birds that inspired the company name. Source: Vale.com

Macaws are ‘true parrots’. Apart from being large and colorful, they are also intelligent. They also learn to speak pretty well as compared to other parrot species.

As such, they are very ‘chatty’ birds. We came to like how they provided protection through their wings and talk intelligently as parrots usually do. Plus, their personality seemed aptly symbolic of Spixii’s vision of helping more people get better protected.

Meant to be, right?

The founders took it as their sign and with the help of the talented designer Emma Lawton, they drew and colored Spixii to life. The logo with a pointed-head and four shades of blue represents the four wings of the parrot.

As per the IUCN [1], the Spixii parrot is now extinct in the wild. A few are still held captive for breeding. However, sighting it in its natural habitat in the wild is an impossible affair now.

Where to from here?

Since its inception four years ago, we have relentlessly worked towards our vision of “helping more people get better protected.”

The founders realised the confusion and hesitation that the general public had towards insurance. They factored in the consumers’ false belief that insurance is a complicated affair and came up with innovative products that make the insurance journey easier and uncomplicated for the customer.

Standing at the threshold of 2020, we are proud and excited at the strides that the company is continuously making. We continue to stand like the magnificent macaw while providing intelligent solutions and extending protection far and wide.

PS: You can have a look at the Spixii solutions here and chat with the infobot (our very own in-house macaw) here!